My son tells me that what I will miss most about Norway is Kvikk Lunsj, a candy bar that is remarkably similar to an American brand that rhymes with Chit-Chat.  I believe KvikkLunsj is better and that in a blind taste test I could distinguish the two, but I am probably kidding myself.  In any case, I love them.  I really, really love them.  My family gave them to me in lieu of a birthday cake because I love them so. They are not at all good for you.  They are not high quality chocolate.  They are junk food.  And I love them.

I tried my first Kvikk Lunsj because they’re a common snack on weekend ski trips.  You put one in your pocket with an orange and head out.  Kvikk Lunsj is far superior when consumed chilled.  “If this can keep skiers going, it can keep me going, right?” I rationalized that first time.  And then it became my standard backpack snack, my protection against a delayed flight or train or misreading the bus schedule.

Since I knew that I was deluding myself, I dug in deeper.  Kvikk Lunsj wrappers include a description of a hike or walk in locations all over Norway.  They always end with the injunction: “God søndagstur!” I started trying to translate the wrappers to justify my purchases.  I got extra excited every time I was in the location profiled on the Kvikk Lunsj wrapper.  I took pictures of the wrappers of the bars that I had consumed: 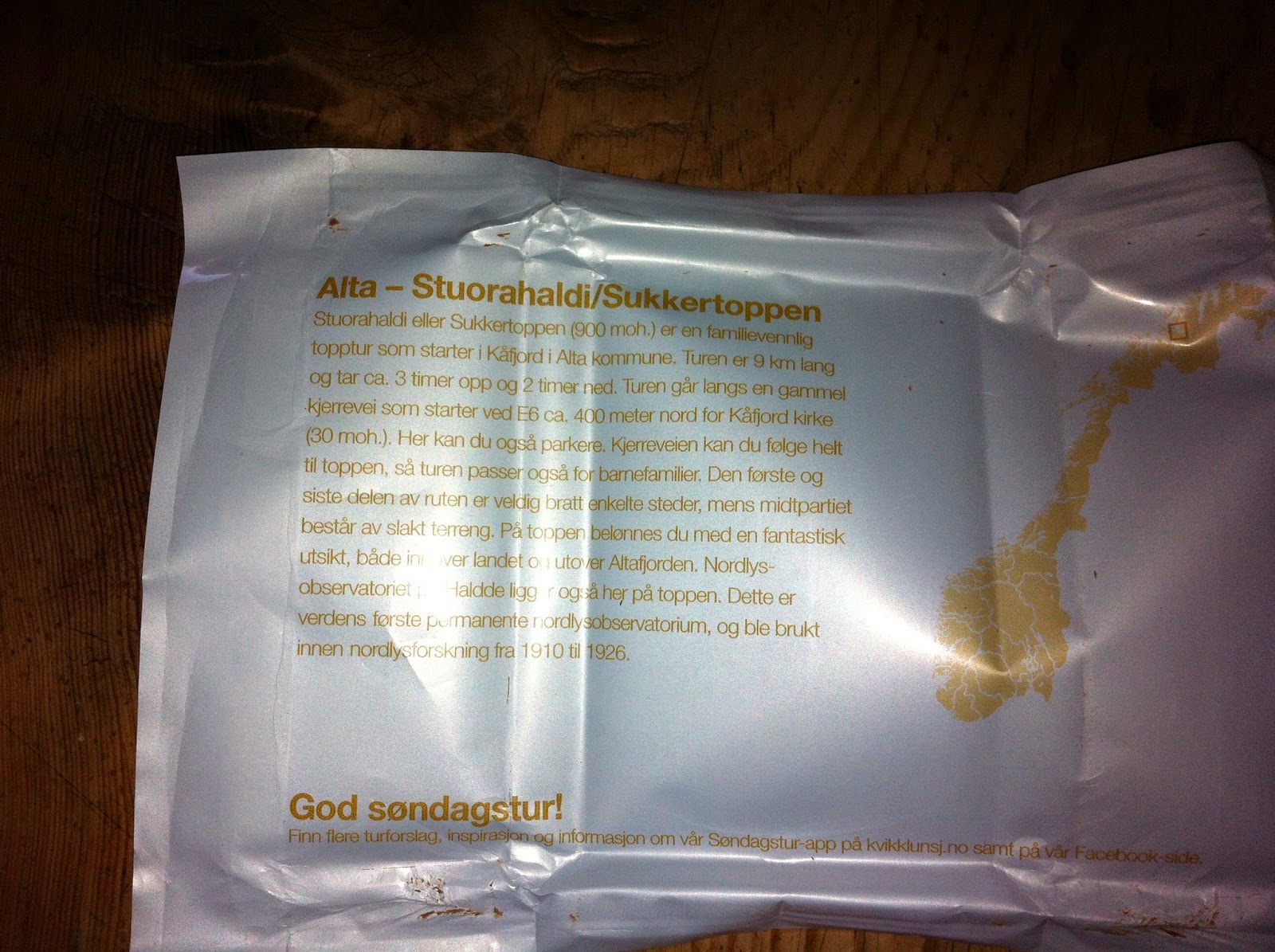 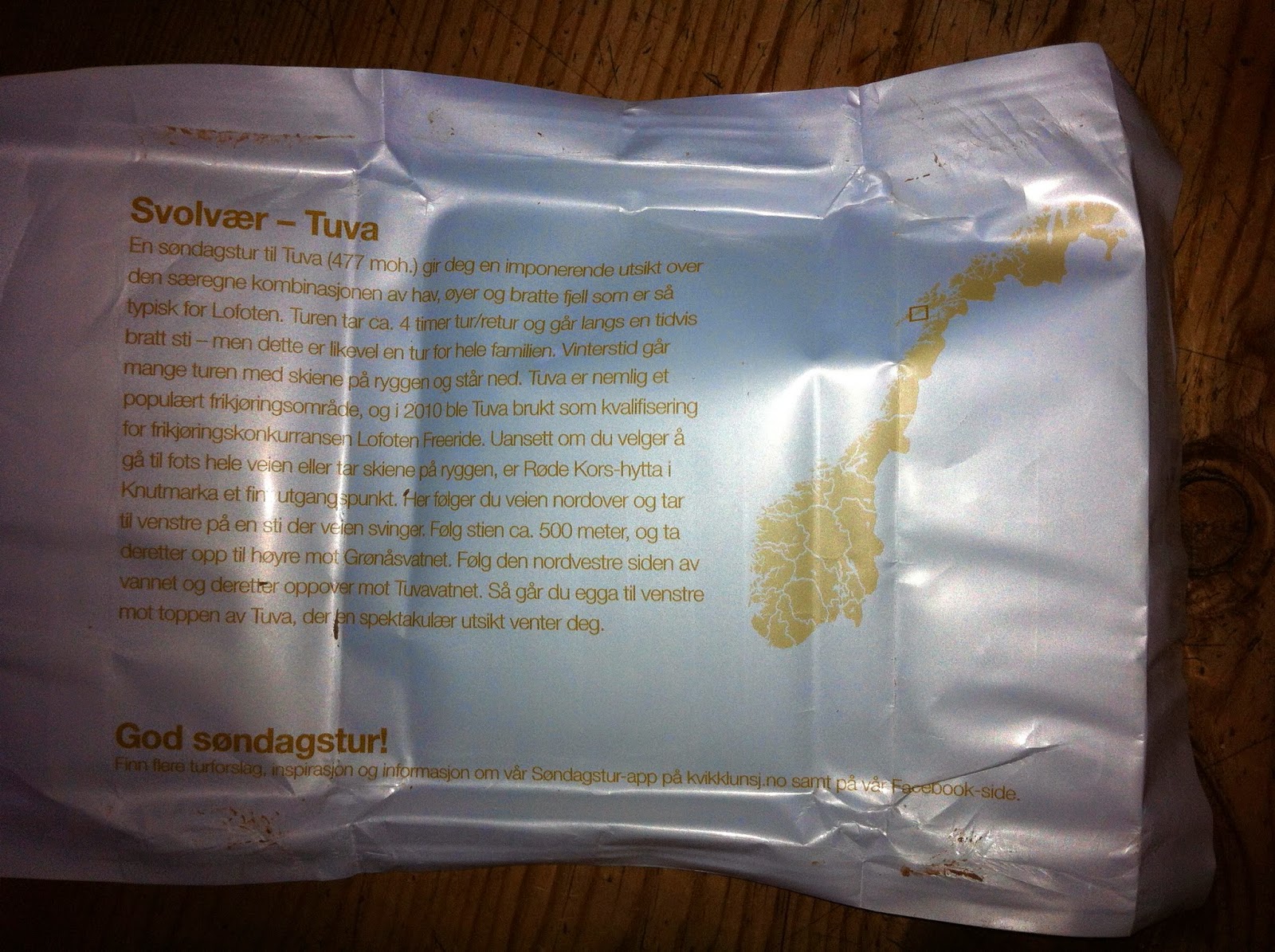 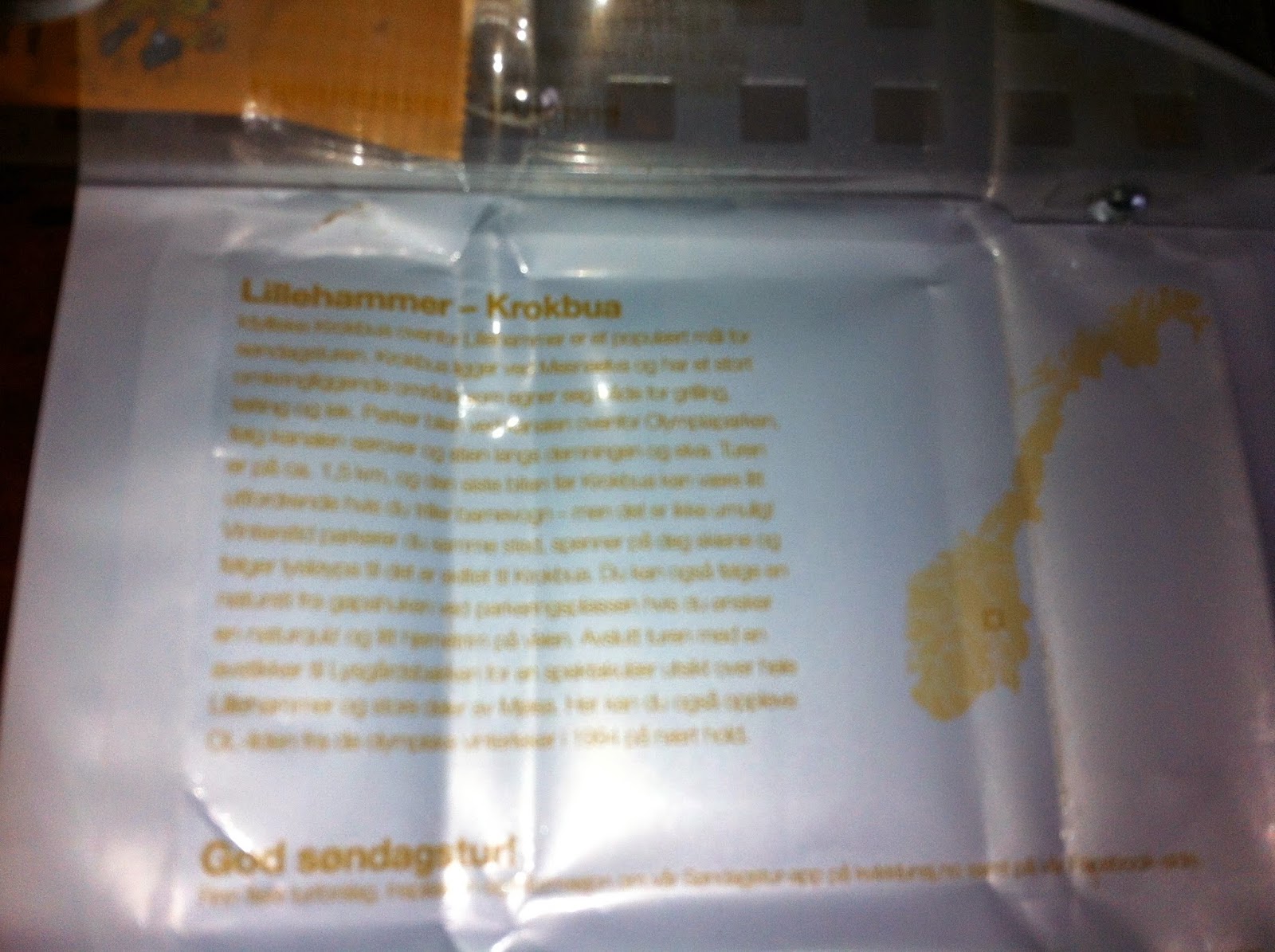 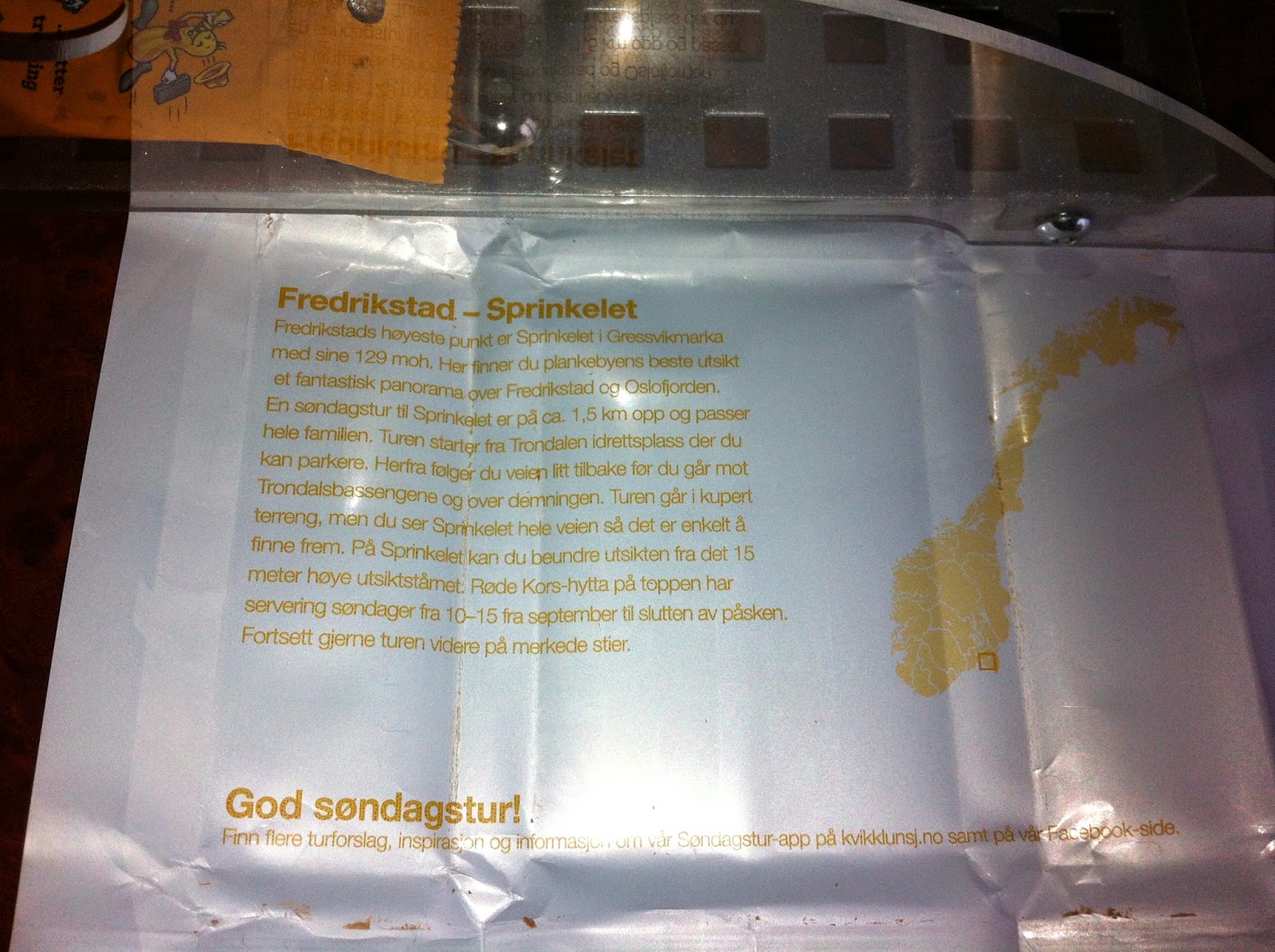 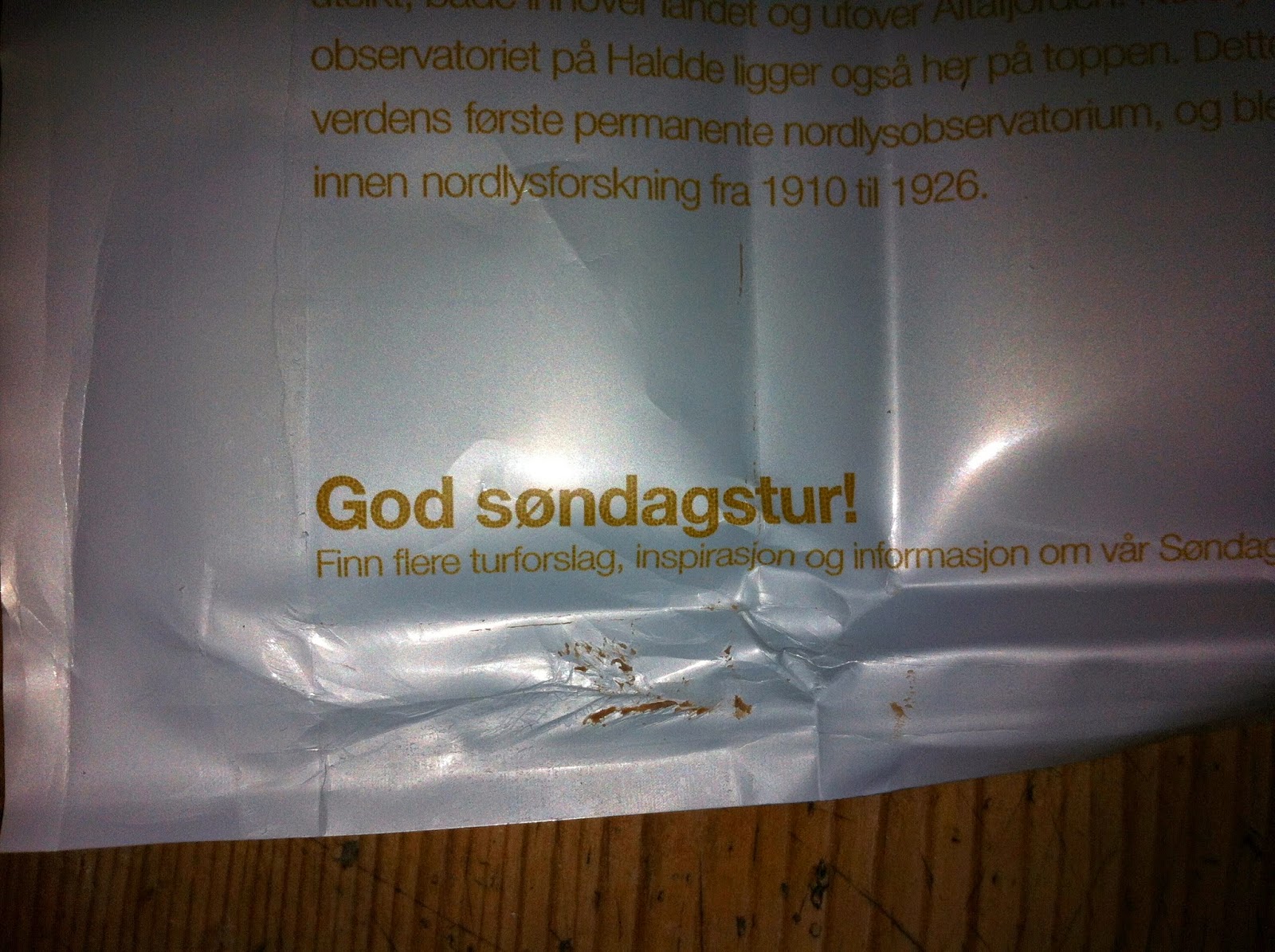 (until I became embarrassed by the number).  More than once, I actually took the hike.


When I was in Bergen with my family, we even went to the KvikkLunsj website, where consumers post pictures of their Kvikk Lunsj God Søndag Turs.  And everyone looks really happy.  And remarkably fit, given that they’re eating junk food. 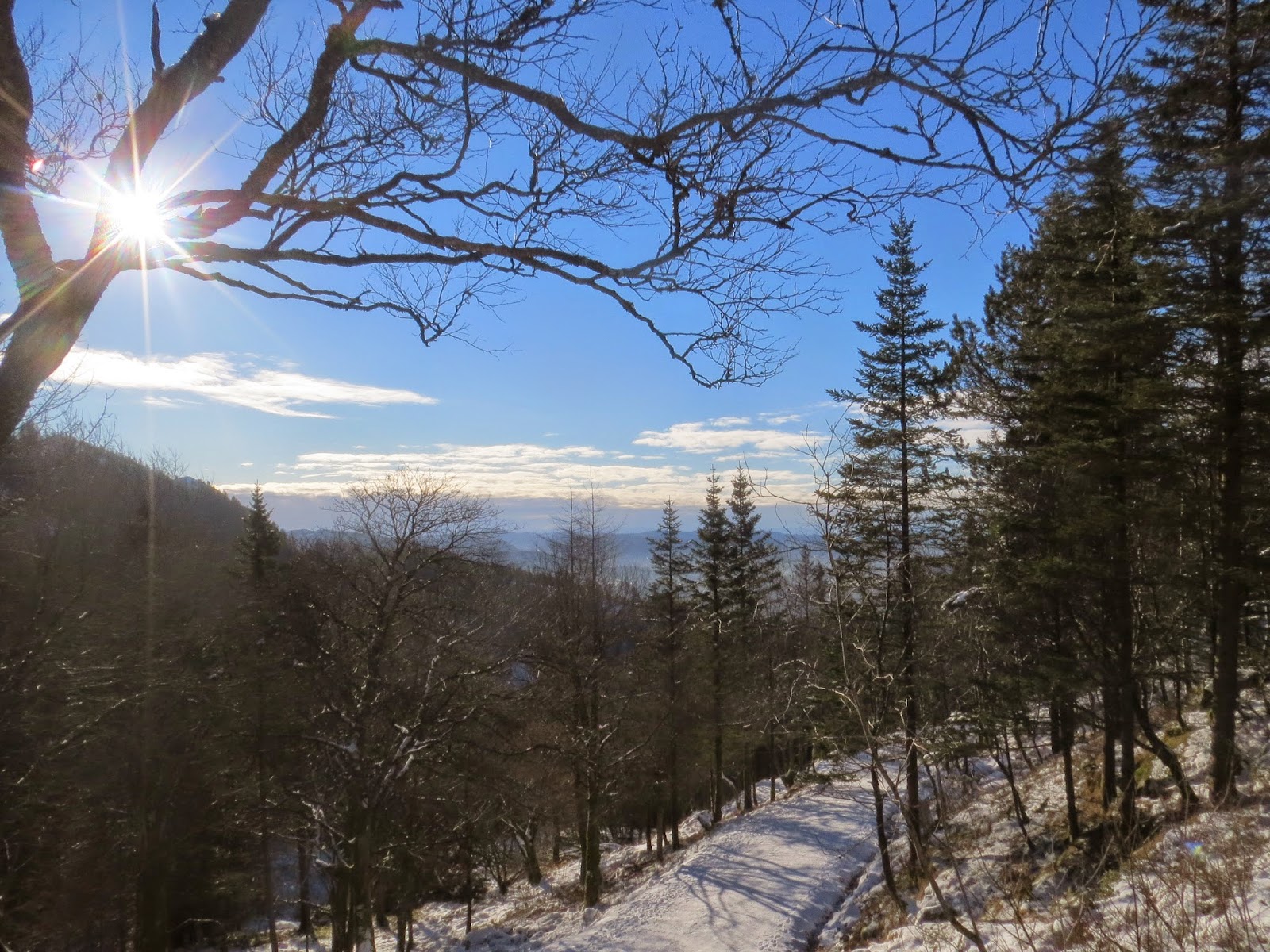 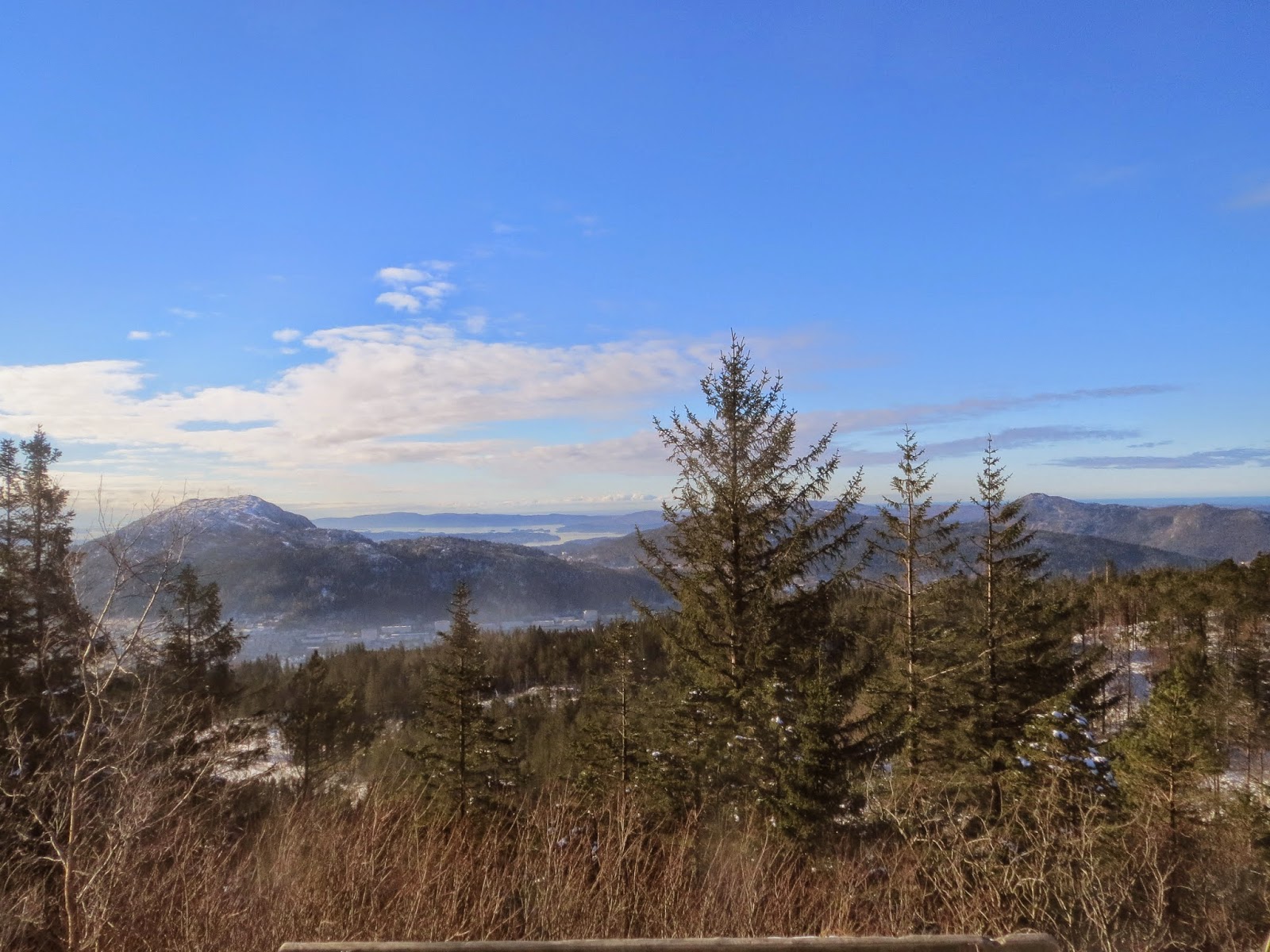 I was teaching later in the day and had forgotten proper walking shoes and a hat. 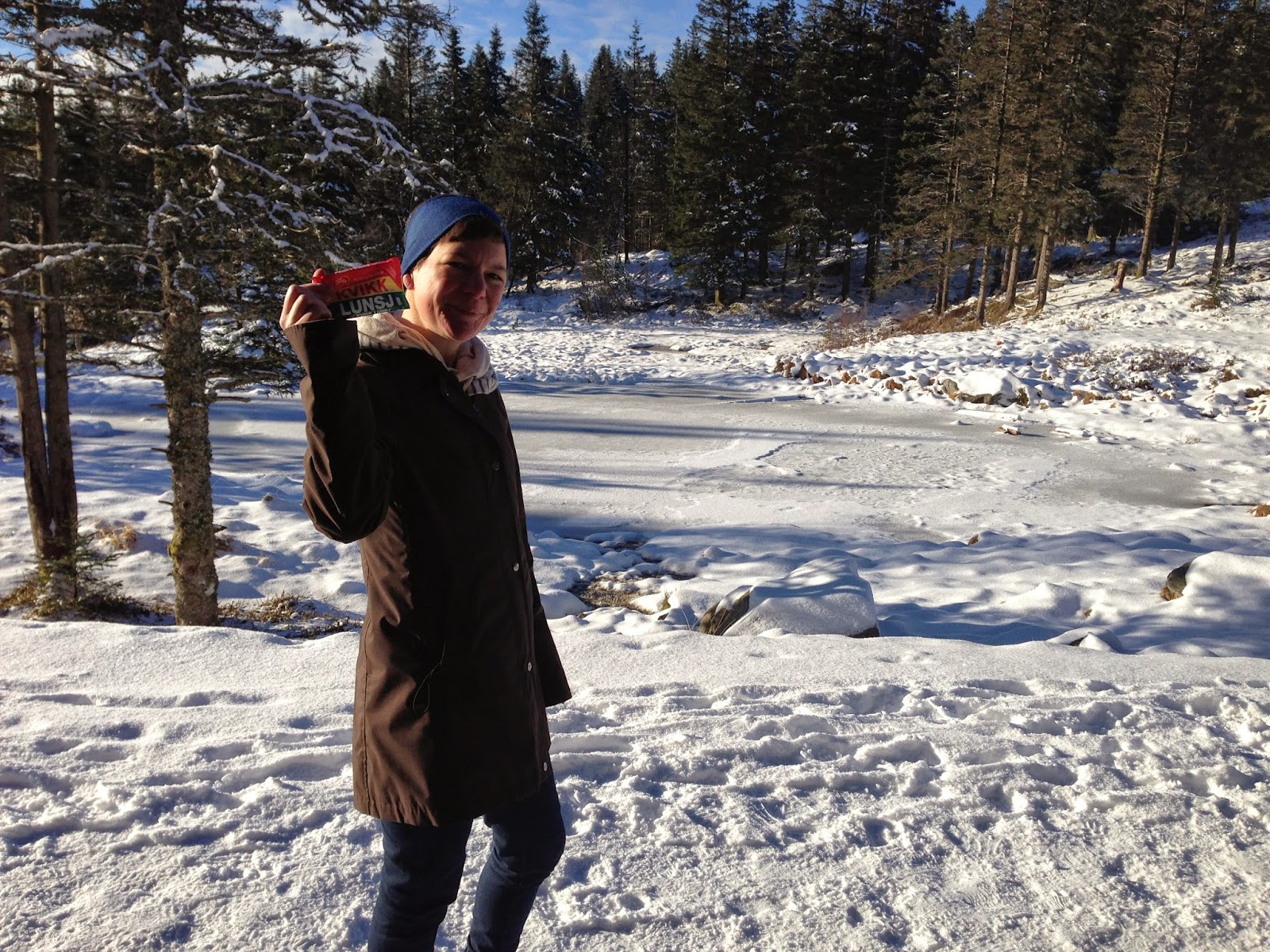 Really, the only Norwegian thing about me that morning was my Kvikk Lunsj.

I mused about whether Americans would be healthier (and would dress more appropriately for the weather) if our junk food came wrapped in hiking suggestions. 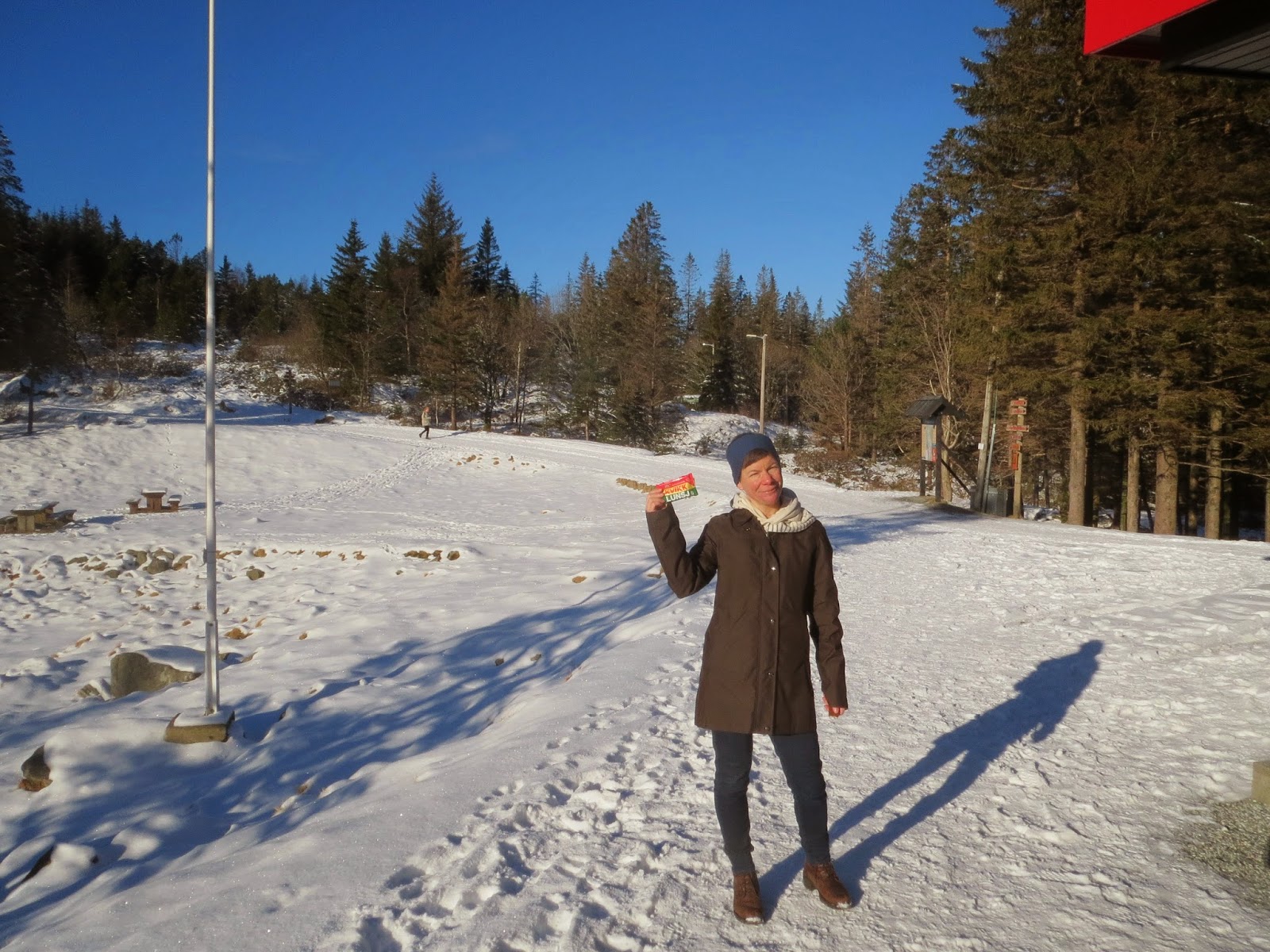 (Perhaps the real question I should be exploring here is whether Kvikk Lunsj is the magical ingredient necessary for Americans to affect that look of European ennui.  Don’t deny it.  You know the look.)

Lately, I haven’t had much Kvikk Lunsj.  My teaching obligations are complete.  I’ve begun to pack and clean.  And the weather really isn’t right for it.  They really are better served chilled.  So maybe it’s not what I will miss most.  We’ll see, come next year’s birthday. 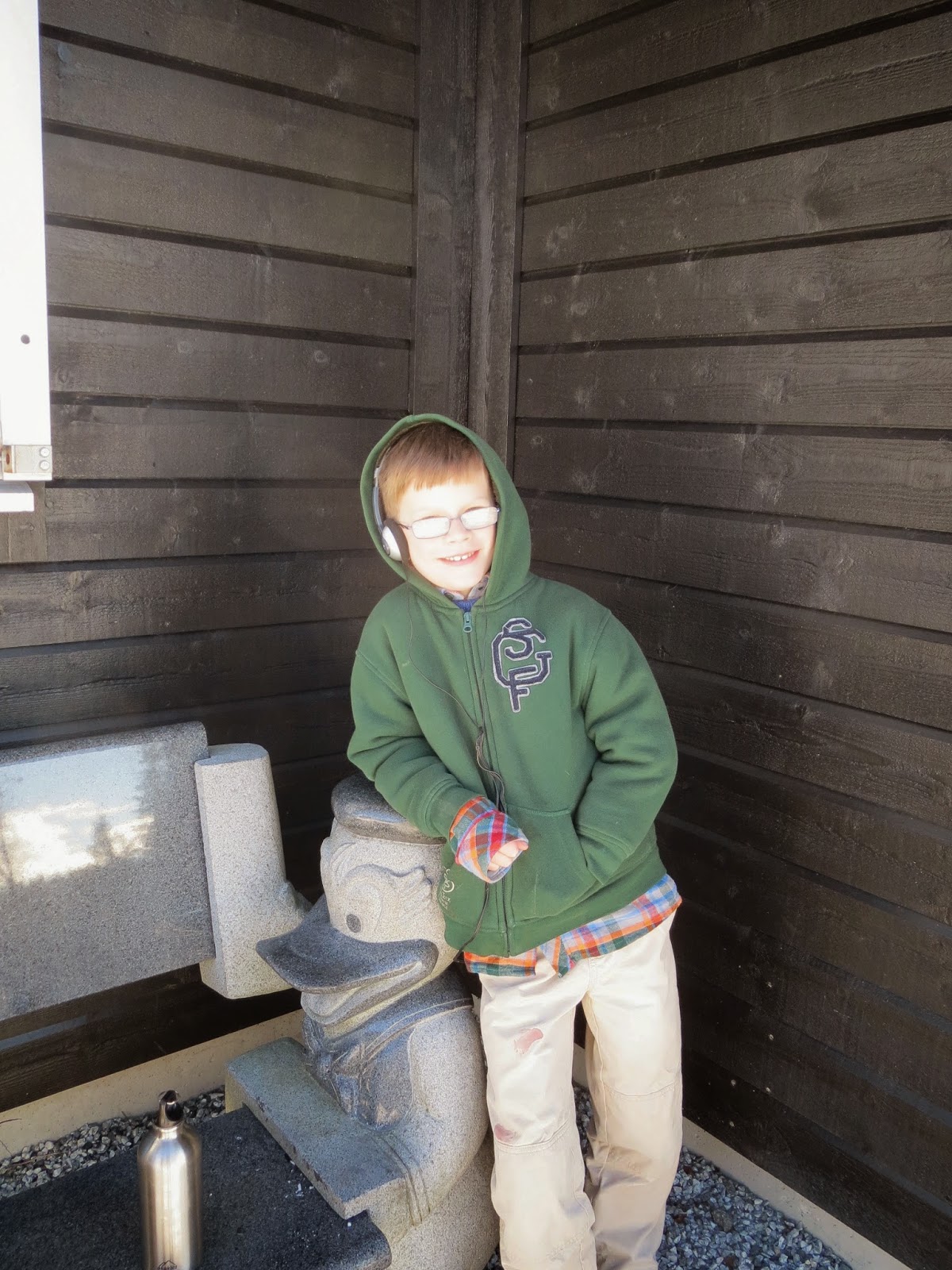 Flannery Burke will be traveling Norway as a Fulbright Roving Scholar from 2013-2014. She writes here about American and Norwegian perspectives on nature and the environment. The views expressed here are all her own and not those of the Fulbright program.